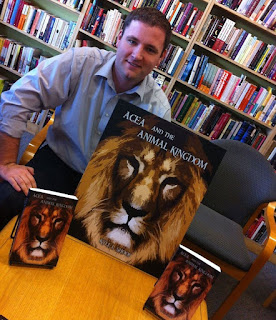 I write for two reasons: (1) to entertain and (2) to fulfill a lifetime goal of mine. But I never actually thought I would write a novel, let alone a whole trilogy. Now here I am finishing up the last book of my Acea Bishop series. But when I reflect on why I set a goal of one day writing a novel, I think there was always an intrinsic part of my nature meant for me to eventually end up a writer.

In eighth grade, my English class was required to join a state-wide writing contest. Only a handful of students from all of Washington State would win the “Gold Key” award. From the moment the mandatory contest was announced in class, many serious students began conjuring up what their approach would be to write that award-winning masterpiece. I was not one of them. Instead, I forgot about it until the day before it was due. I hurriedly wrote a couple pages about a science project that had gone awry the week before, and guessed at which category my entry fit into. (I recall having no idea what some categories even meant and just randomly checking one off.) My story was entitled "Dissecting Chucky." Chucky was the name I gave my fetal pig in science class. The required dissection in that class did not go well, probably due to same lack of effort which I had put forth for my English class’s writing competition. Anyway, I won the Gold Key award (as well as several bad looks from straight-A students). But instead of recognizing the internal creative juices I had, I chalked it up to good luck.

Several years later, when I was in college for my undergrad, I was in a class which was a complete letdown. The class had promised to be a venue for creative minds, but it was unfortunately not that. Due to that class, I ended up making lifetime goals. The goals were: to record a music album (I play guitar), write a book, and learn how to paint. Years later, I completed the first goal. However, I ended up instead writing and recording three CDs instead of one. At the end of my last album, I wanted to take a break from music. However, I did not immediately remember my goal to write a book.

Then one night, I had a dream. That dream was the first two chapters of my first novel, Acea and the Animal Kingdom. From there, my imagination took off—creating the plot, conflict, and setting of a trilogy. Since that initial dream, I’ve been writing to entertain my readers and allow them to escape into the worlds which I’ve worked so hard to create. My wife taught elementary school for several years, so my goal was to write a story which would appeal to both parents and children—something they both would want to read together. My series centers around twelve-year-old Acea Bishop, who awakens to find that he’s been kidnapped from his home on San Juan Island and brought to an ancient, magical kingdom full of real animals. In trying to escape and to make his way back home, he unlocks the mystery of the kingdom’s history and reveals things about his past which he never imagined existed.

Writing the trilogy has not happened without sacrifices. In addition to writing, I am also a practicing attorney. So, finding time to write (in addition to spending time with my family) is difficult. This can be emotionally taxing, and I’ve learned that a book’s dedication is not just a gesture—it’s hard-earned. In addition, my decision to be independently published naturally leads to additional financial obligations. But I’ve been very enthused and motivated by the outpouring of positive responses I get from my readers! These positive responses from readers of all ages make the sacrifice well worthwhile.


Books one (Acea and the Animal Kingdom) and two (Acea and the Seven Ancient Wonders) of are available now in paperback and e-book on the Amazon, Kindle, iTunes, and Google Play stores. Kyle is currently completing the last in the series, Acea and the Adventure Thru Time, which is anticipated to be released within the next year. For more information, please visit Kyle's website.