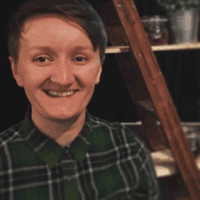 Q: Jenny...what made you become a writer?

A: I don't know if there is a typical day for me, to be honest. I fairly frequently have a long bus journey to and from work, so I may spend part of that journey either working over ideas in my head, or getting something basic down on my laptop. If I'm at home, I like to have a cup of coffee on hand and some mood music playing. By mood I mean something that evokes whatever place or feeling the scene I'm about to write should convey.

A: Not a huge amount. I can't write from the seat of my pants, as the saying goes, but equally I don't like to map every scene out in advance of writing it. I've actually just this week started a blog post series exploring the ways that I am applying frameworks from my day job, as a software developer, to the writing process.

A: That's hard to say. As many as it needs, I should think. My first pass at anything I write is inevitably littered with grammatical errors and needs a thorough scouring for any misplaced apostrophes. After that, there's always plenty to consider in the editing process.

Q: What is your best tip for editing a manuscript?

A: Get someone else to look at it for you. Multiple someone elses, in fact. Not that I don't think there is a lot to be gleaned from setting aside then returning to your own work, to review and revise, but a fresh pair of eyes—someone else's eyes— is an invaluable tool.

A: I'm not sure that you could call it a trick, but the word-processing program Scrivener has served me especially well, when it comes to being able to plot and plan in a structured but flexible way. In terms of habits, I'd say reading out aloud what I've written. It's often a great way of getting a feel for whether a sentence is structured well, or testing whether dialogue sounds believable.

A: I do, and I envy any writer who doesn't. One technique that I have found useful in clearing the blockage, so to speak, is to work on something different. I know it sounds a little counterproductive, but sometimes spending a couple of hours—or days—working on a different creative writing project, or on something not related to writing at all, does wonders for me. If in doubt, though, going for a run has become a sure-fire way of jiggling the blockage out of my brain.

A: It never occurred to me to chose a genre to write. Fantasy and science fiction are the genres that I love to read, so it was natural for me to write in those genres too. I can't think of any other genre that I would want to write. Not that I don't like to read outside of sci-fi and fantasy, but I definitely have no inclination to write, for instance, a thriller or a piece of literary fiction. I know where my interest and strengths lie.

Q: Do you utilize beta readers?

A: I haven't so far, but it's definitely something that I would consider for projects in the future. The concept makes a lot of sense to me, since I work in the software development profession, where we release software into various stages of alpha and beta before letting it loose on a wider audience. I've seen firsthand how the feedback of beta users has been key in refining a product into something better, so I can only imagine the same would be true of using beta readers on a novel.

A: I'm not published just yet, but I can answer this in reference to my novel Witherfist, which is currently in "funding" on Inkshares. In the very first scene, the reader is introduced to the central character, Irusai Daud. This introduction has to do a lot in the way of establishing what the world and its people are like. I enjoyed writing it, and I'm proud of it, because I think it struck the right balance between building the readers' understanding of the world, and progressing the narrative. There is a lot of backstory in place, for the characters and the setting, but the scene is never weighed down by any of it. Instead, it's sprinkled here and there with hints and teases in a way that, I've been told, keeps the reader wanting to know more.

A: I'd like to think that they're both something you've not seen before. Irusai is a woman in her late thirties, a mother and a wife; but also an incredibly accomplished warrior. She was once a provincial governor, in the same vein as the Samurai lords of feudal China. When a political coup threatened the country, she and a number of her peers made pacts with spirits to gain the upper hand in combat. Now, Irusai finds herself permanently bound to a creation that feeds upon the life energy of others. She is effectively in self-imposed exile, and to return home she must not only find a way of ridding herself of the spirit tied to her, but also potentially come to terms with the knowledge that going home means accepting an illegitimate ruler, if only so that she can be reunited with her husband and young daughter.

The other central character is Arren, a princess of the Empire that Irusai was sworn to protect. Her father was overthrown by her mother in the political coup that drove Irusai into exile. Arren sided with her father in the conflict and consequently is also a fugitive. At the time of the coup, Arren was outside of Imperial territory, leading diplomatic and trade negotiations in the desert sultanates of Isherban. She's an incredibly capable woman, who has been well educated since childhood, but doesn't have a huge number of friends in the Imperial court. She is also a lesbian, something that perhaps shouldn't be so special but to me, as a gay woman myself, actually is. Her sexuality is only a small part of her character, but it's an important one to me, as someone who grew up surrounded by images of Disney princesses who never quite represented me.

A: Make it personal. As I'm taking part in a publishing contest for the first time, a lot of what I've been doing is feeling out what works and what doesn't. I've tried all sorts, from placing adverts both in print and online, to joining networks of readers and authors. What has been the most successful, without a doubt, has been engaging on a one-to-one basis with potential readers.

A: I'm always happy to receive constructive feedback, or feedback that amounts to not much more than "this just isn't my thing." So far, touch wood, I haven't had any majorly negative reviews from readers. If or when I do, I'm not sure how I would deal with them, other than to accept that not everyone will like what I do, and not let that knowledge become a burden.

A: I'd have to say the supporting community. There are so many of us, all trying to make our voices heard and share our stories with the world. It can be daunting, but sharing the experience with others makes it less so. On top of that, I have found there is a real willingness to help not only promote within the community, but offer frank and honest feedback on any work you might have in progress.

A; Dividing my time between writing and promotion. Though having a support network in place is fantastic, you ultimately have to be a one-person promotion machine, unless you're willing and/or able to sink a bunch of cash into getting someone to promote for you.

A: My current project is the epic fantasy novel Witherfist, which is part of Inkshares. Witherfist is an epic fantasy, the first in a series of novels. The story revolves around two women, both of whom have been expelled from an empire they once either fought to protect or, in time, stood to rule.

A: This is such a tricky question to answer. After mulling it over for far too long, I've settled on three by some of my favorite authors.

A: I think it would be a toss up between two. The first would be George R. R. Martin, since I'm eagerly awaiting his next release and would love to pick his brains. The second would be Brandon Sanderson, whose work I admire and draw a lot of inspiration from. Failing that, Hemingway. I feel like he'd show me a good time!

A: Start writing. Start getting involved with communities of like-minded writers and potential readers of your fiction. These networks will become invaluable for you.


No witches, warlocks or vampires...
just a sexy tale about a guy trying to live the Hollywood dream...
Luigi's Chinese Delicatessen by Jim Vines