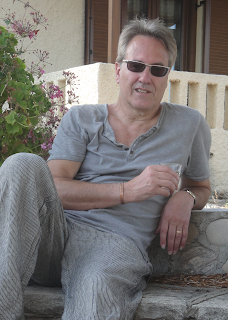 Q: Nick...what made you become a writer?

A: I’ve always written contributing articles and book reviews to periodicals, mainly archaeology related ones. I’d always wanted to write novels and my head began to fill with ideas until I got to the point where I sat down to write the first words of my first book. Once I realized I’d be able to finish the book I decided to leave my job and become a writer.

A: I have two typical types of day. The first is to get up and have breakfast while I read the paper. After about an hour or so something tells me I need to write. I listen to music as I write and write for as long as the ideas flow and the writing isn’t forced. The second type of day is when the ideas don’t come and the writing doesn’t flow, in which case I do something completely different until it begins to happen. I also need many days to research, make notes and prepare for writing. This preparation creates a structure that allows me to write.

A: I find I need an idea of the story line to provide me with a structure that shapes the novel but provides space to accommodate the flashes of inspiration that all writers get. In this way the inspiration changes the dynamic but stays within the overall intention of the book. I write novel cycles and this demands discipline to prevent one novel subverting the others. The only way I can do this is by starting with an idea of where the series is going to end and the only way that works for me is to road test the validity and integrity of this before I begin. Once the structure is in place I know I have plenty of freedom in how I deliver the story and action.

A: I constantly revise and revisit as I write. Then I try and leave the book for a period without thinking about it. Once it’s out of my head I return and do a full scale revision of the plot after which I give it a final revision for style and mistakes before it goes to be edited.

Q: What is your best tip for editing a manuscript?

A: I have two tips. If you have the slightest hesitation about anything then cut it. The second is that the first draft, however much revised, is always too long and will require pruning, often quite savagely. It helps if you try to view your writing from the perspective of a hostile critic.

Q: What habits and tricks have made you a better writer?

A: I am fortunate to have someone who reads my books and comments critically as I am writing. It is very easy to become too wrapped up in your creation and complacent about it. I also pay attention to criticism of previous books where it is helpful. I think after one book has come out it is a good thing to consider what I could have done better before starting the next.

Q: Do you suffer from writer’s block? If so, how do you fight it?

A: When I get blocked, which happens periodically, I stop and do something else. I find that going for a walk, or other exercise helps. If I set out to walk the fields for a few hours I take a note book with me as once my head clears the ideas come....and the ideas are back.

Q: What drew you to your preferred genre(s)?

A: I was an archaeologist and ancient historian and the ancient Greek books came out of a question which was difficult to understand through research. The feeling grew that the best way to try and explain the reasons why the Athenians invented and then defended, against all the odds, democracy was to try and fill in the gaps and that included the psychology of the individuals concerned. The best way to approach that was through imagining their situations; from that it was a short step to a novel. The supernatural thrillers were inspired by a love of the more subtle, atmosphere-driven examples of the genre and also, and there’s no way to get around this, by my own experience.

Q: Do you utilize Beta readers

Q: In your most recently published novel, what was one scene you really enjoyed writing—and why?

A: I enjoyed writing the scene where a disoriented Jed Gifford is hunted across the moss in Dark Coven (book 3 in the Ancient Gramarye series). It deals with the demise of a particularly unpleasant minor character and is written from his perspective. It is a particularly dark scene and very fast moving. I felt the sense of strange atmosphere as I wrote and because of that managed to inject an element of sympathy for Jed I hadn’t anticipated, and even a touch of dark humor. After all everyone has their own story to tell. I think it is a genuinely ambiguous and frightening few pages

Q: What makes the characters of your most recent novel so special?

A: I finished Greenman Resurrection last night (Halloween). It is the last in the Ancient Gramarye series. I think the characters are special because they have loved, suffered and evolved over the best part of twelve hundred pages. The longer you spend with a character, sharing their feelings, the more real they become. This is particularly difficult in the case of the less flamboyant, ordinary characters so necessary in delivering a believable cast. If the characters don’t work, the book won’t.

Q: What is the best advice for author self-promotion.

A: I’m not really the person to answer that as I don’t think I’m very good at it. I’ve taught myself social media, etc., but the best advice I can give is persevere with the writing. It took me a long time to build up a readership. I also think it helps to promote and help other writers; it’s a very lonely occupation.

A: We all get them, they are a fact of life. I have three points on this. If they hurt too much, stop reading reviews. Otherwise try and differentiate the spiteful from those that make a serious point. Once you have got over the upset consider that point and see if you can benefit from it. The best help I ever got was when I was writing my first book. I showed a draft of it to a friend who was an experienced author and then sat back expecting a shower of praise. She eviscerated it, told me some home truths about how much hard work it takes to write well and then gave me some very good advice on how to start again. It is the most significant help I’ve ever had, based as it was on honesty.

A: The freedom that comes with it and the feeling of self worth when you begin to succeed. By succeed I mean acquire a readership who love your books.

Q: What is the least favorite aspect of being an indie author?

A: Having to learn everything for yourself, no book promotion, and the isolation of the role.

A: I’ve just finished the Ancient Gramarye series of supernatural thrillers which began with Skendleby and I think for a few days I will sit emptily and miss them. In mid November I’ll start writing The Sacrifice of Athena, the third of the Luck Bringer series. I’m looking forward to inhabiting my favorite character, Mandrocles, again.

A: It is so hard to choose and I’m constantly reading, but three that come to mind are Bleak House by Charles Dickens, Waterland by Graham Swift, and probably, because I loved it when I was at school, Lord of the Rings. However apart from the Dickens, although it’s a tight thing between Bleak House and Great Expectations, on another day it could be a different list.

Q: If you could have lunch with any novelist, living or dead, who would it be and what would you talk about?

A: Not quite a novelist because there were no novels when he was writing, but I’d like to have lunch with Aeschylus, the Greek poet and dramatist from the fifth century BC. He was the first war hero poet who fought at Salamis and Marathon where his brother bled to death next to him. He invented modern drama and managed to write about women as strong characters and not just ignore them like the ancient historians did. He is a major figure in the Luck Bringer series and I’d like to talk to him about how my portrayal of him could be improved. I’d also like to share experiences about how facing violence and dealing with death affects writers. I think there is plenty of that in his writing and there’s a little in mine.

A: Do it because you love it, not for money or celebrity.

A: The final words of the politician Lord Palmerston. “Die, my dear doctor? That’s the last thing I intend to do!"