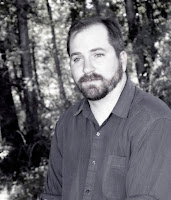 
Writing helps relieve me from everyday stress. I step into other lives, sometimes in a different world altogether. It allows me to create something from nothing. A bad day can be channeled into a fight scene. It works for blowing off steam. I’ve always written for myself and only recently I’ve been sharing it with others. Sometimes it can be difficult to continue to write, excruciating even. Especially when my imaginary friends don’t want to talk to me. When that happens, I have a snowman stress ball I throw around a lot. Off the walls, in the air, on the ground. It drives my animals crazy and anyone else that happens to be in the house with me at the time. While I’m doing this, I try tapping into the characters I’m writing about at that time. You know, get into their heads.

I could be better with my writer's block if I could be more consistent with writing.  Finding the time can be difficult. I work full time. I also have a wife, two kids, two dogs, and two cats. We live in a small town in Montana, in the heart of the Rocky Mountains. Life can be crazy in a small town, particularly if you have kids. I sit on the board for our local youth soccer program as well as the board for our local friends of the library. I help run my daughter’s 4-H club and sit as a member on our county’s 4-H council. Finding time to write can be extremely difficult some weeks. When I do get a chance to write, I do my best writing in the morning and my creativity usually runs out around noon. Sometimes I get creative streaks at night too. In the middle of the day I tend to sit in front of the monitor and stare at it or surf the Net (bad idea on that one) as I'm trying to write.

Like many indie authors, writing full time without having a day job would be quite an achievement and a goal I’ve set. It would be nice at that point. I'd take my kids overseas and let them see different cultures. Possibly start a travel blog or something along those lines. With writing, I can travel and write at the same time. Another dream of mine would be the ability to wake up one morning and say “Let’s go to Europe today!” I think it would be amazing to have that much freedom. Plus I could visit castles, which would be cool considering I’m mainly a fantasy writer.

However, I tend to mix genres when I write. I don’t stay within the bounds of one genre; it could get boring that way. A perfect example, my current novel The Books of Azric: The Beginning, is a blend of medieval fantasy, steampunk, and western, with portals. To be honest, I didn’t know about steampunk until I explained my book contained steam machinery in it. Elves cruising around in steam carriages. I just thought it would be cool. My friend explained it as a steampunk crossover. Researching steampunk blew my mind. As far as "western" goes, this book doesn’t involve guns or anything like that, but there are many other things that make it feel western: a high noon showdown with swords, throwing knives like a cowboy would use two six shooters, sheriffs and bounty hunters. It may not be the normal western novel but the western theme can be found.

The Books of Azric started off being about a bounty hunter, Colt, and his apprentice, Zane. Then they met other characters. The next thing I knew my story changed from what I planned. My characters wanted to tell a different story in a different way. I intended on the content to be more like Lord of the Rings, but Lord Roderick (one of my favorites to write) told me Game of Thrones would be more to his liking. My characters bully me into what they want. They choose their own path and suffer the consequences. I do have other stories out, one called “The Siege,” a short story about sharing the rule between Human, Elf and Dwarf. One of my favorites, yet to be published anywhere but on my blog, “Gleeson the Defender,” is a bloody tale but a fun read.

I have received great reviews from peers, readers, and my beta readers on everything I’ve done. My most important initial feedback comes from beta readers. They read it before anyone else and help me find holes in the plot that I might have missed. My wife found a huge plot hole at one point. Devastating! I spent months writing this and anger took hold. I just wanted to delete it from my computer. I’m glad I didn’t. I fixed it in three sentences. The fix and the catch made me happy. I would never publish without beta readers. The unimaginable importance of beta readers can’t be matched.

To all those that want to write but don’t think they have what it takes, my advice is to pick up a pencil and paper, open up a word doc, or anything else you use to write on, and just write. It doesn’t need to be perfect, it just can’t be forced. Let it flow and let your characters do the talking.


No witches, warlocks or vampires...
just a sexy tale about a guy trying to live the Hollywood dream...
Luigi's Chinese Delicatessen by Jim Vines