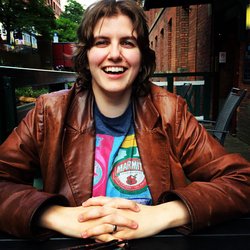 Books were always an important part of our household. It's what every first-time visitor said as they gazed around our living room: “What a lot of books.” Nothing was taboo, you helped yourself to whatever looked interesting. My sister and I belonged to our local library as soon as we could walk; both my mum and grandma were gifted storytellers. Perhaps it isn't surprising I started to write stories of my own.

The catalyst was an assignment at school. How “Write a story” translated into “Write a twenty-eight page illustrated haunted house story,” we will never know, but that's what happened. This simple piece of homework unlocked something deep within me. I was hooked. After that I took a folder wherever I went, scribbling down ideas and sketching characters. I announced at eleven, apropos of nothing, that one day I would be a famous author. My mum was mortified!

The trouble was I didn't have any staying power. Star Wars fan fiction aside, everything I wrote petered out after ten pages. I wrote dozens of radio plays and musicals but they were intended for an audience of one—i.e., me. I kept diaries, but obviously they were top secret. At fifteen I finally completed a manuscript and mailed it off to a nearby publishing house. I was crushed by the inevitable rejection and didn't write for a year.

My salvation came when I was selecting universities. I was planning to study English Literature, my best subject, but the words "English Language with Creative Writing" in the Lancaster University brochure galvanized me into action. This was it! I was going to learn how to be a writer!

Many universities offer creative writing courses now, but it was a novelty back in 2003. I sent them a chapter of my work in progress, fingers crossed. In hindsight, it was utterly feeble, a mass of teenage clichés, but I didn't know any better. Somehow they saw past this juvenilia and offered me a place. The class proved a steep learning curve. I had to overcome my crippling shyness and horror of public speaking to actually read my work aloud—awkward when it was full of gay relationships and skullduggery. I joined the campus writing group, where I met my partner. To this day, she is my best collaborator and critic.

I graduated a more confident, competent writer. The perfect subject eluded me, however—it was another two years before I began to write about a closeted Victorian governess and her charge.  That novel, The Governess, was published with Kindle Direct Publishing in 2012. My partner persuaded me to enter it in the 2013 Polari First Book Prize competition. I shrieked with joy when it ended up on the longlist.

By then I had developed a taste for sustained writing. My second book, The Revenge of Rose Grubb, couldn't have been more different. It was an urban fantasy revenge tragedy—or, as I once described it, “Hamlet for girls.” Since it was still on the niche side, I thought it would be best to indie publish this one too. My research had shown that many publishers were reluctant to pick up mixed genres or LGBT subject matter.

My latest novel, Love and Robotics, is yet another departure. Published earlier this year, it's the story of Josh, an artificial, or advanced, robot, and Alfred, the grizzled explorer he falls in love with. It was my first attempt at writing science fiction and romance. It's also the proud result of four years, countless beers and possibly the weirdest search history on record. I became fascinated by robot ethics and the questions they prompt: can a robot ever truly love a human? What if unscrupulous humans take advantage of or maltreat robots? If whole areas of employment become roboticised, what happens to the human workers who are made redundant? If robots become sentient, aren't they entitled to rights? I try to answer all these questions and more.

I wouldn't say I had anything that resembled a method. I write when I feel inspired, not at any other time. Reading is vital—how else will you know what works? I try to keep fresh by writing blogs, reviews, and short stories as well as novels; my current project is a novella about a love triangle, set in 1911. I love social media but can't deny that it's an enormous temptation! Before you know it, you've spent hours ping-ponging your views of this celebrity or that politician rather than do any meaningful work.

My goals as an indie writer are far from concrete. As success is so rare in any part of the industry, I'm content to keep on writing and publishing at regular intervals. If it takes off, fantastic, but it’s better to keep your feet on the ground and polish your craft. It's an exciting, intellectually and emotionally fulfilling hobby—and what could be better than that?

No witches, warlocks or vampires...
just a sexy tale about a guy trying to live the Hollywood dream...
Luigi's Chinese Delicatessen by Jim Vines