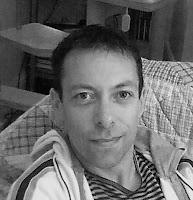 The reason I write now is somewhat different from the reason I began writing. Cast your mind back to 2008: the UK entered the Credit Crunch, and on March 31st, 2008, 400,000 people lost their jobs—myself included. Not so quickly coming to the realization that the situation was hardly likely to improve anytime soon, I stuck around, getting more and more depressed as prospects grew thinner and thinner. A friend suggested retraining to teach English as a second language and then hop on a plane to China. That easy?

Actually, it was that easy. But I didn’t hop on a plane to China; I boarded a train for Toulouse. I speak French and I felt more confident trying to get things done in a country where at least I spoke the language. Turns out to have been the turning point in my life.

Backtrack to the last few days in London prior to leaving for France. My best friend and I were having dinner. He said, “Are you planning on writing a journal?”
I replied, “I’ve thought about it ...”
“Try something different; by all means write a journal but instead of doing it ‘diary-fashion,’ why not write a story that incorporates all of the people, places and events that you will hopefully encounter?”
“?”
“Give it a go...”

In December 2008, I was 43 years old and had never written a word of fiction in my entire life. I had, however, spent 25 years writing technical reports, so the act of writing was not alien, but fiction was a dark ocean, threatening to engulf me. I also had no home, no job, no car—but I felt free for the first time in years. I also had just one suitcase, a laptop and a certificate that said I could teach English.

Roll forward to February 2009 and Toulouse. I was failing to get teaching work and had decided to pack up and try something else. Seated in an Algerian café, enjoying what was probably going to be my last coffee and pastry before heading off somewhere else, I looked across the small square and noticed an old gentleman, seated in the window of his studio, working on a violin. BAM!

It was like an adrenaline rush; the story (The Dog and The Eagle) hit me between the proverbial eyes like a locomotive. Two years later, I had finished a 1,200 page crime thriller trilogy that incorporated as many of the people, places and events of my travels up to that point as was possible. (That trilogy is waiting to be re-edited and republished.)

In September 2010, I found myself back at a Buddhist retreat in the Vosges Mountains of France—a work exchange that turned into an odyssée. On Christmas Day 2010, I took up residence in a small, neighboring cottage, which had no power, phone or Internet connection, and spent the next three years working the land to grow my own food (also generating a surplus to exchange for things I couldn’t grow), and generating my own power so that I had enough electricity in my batteries to have light and laptop for three hours every evening so I could write.

At the end of 2012, two years into the self-sustainable lifestyle, and loving it, I was talking to a friend who said, “Why don’t you publish your stories? You can do it yourself these days.”

I don’t know why I had never thought of it before.

Later, after a few searches and some research, I had an Amazon KDP account, and within a few days, I had published my first title. I became addicted to the process, publishing everything I had already written up to that point within the following few months—all of it unedited for the most part. What a rush! For the first time, in a very long time, I felt liberated...totally energized.

Writing had transitioned from an interesting way to record my travels, to a path to achieve a kind of enlightenment. The stories were—and mostly still are—the ongoing narrative of the journey of a 50-year-old gay man, seeking only to be and remain happy.

At the beginning of 2015, I moved to the United States, to set up an indie publishing company with three of my friends (all indie authors). A very different kind of experience. I love Jeffersonville and Louisville, but hate the fact that you have to drive absolutely everywhere (though drive-thru ATMs and drive-thru pharmacies are pretty cool).

Now, in January 2016, I have just returned from the United States and I am back at the Buddhist retreat in the Vosges, looking after the house and the cat for the owners while they take a break. Still writing, publishing and marketing; also with a publishing company to co-manage (The Carter Seagrove Project, LLC) which is the driving force of my life right now.

I find that I cannot go a day without writing—it is a drug; it makes me insanely happy; and I still incorporate as much of my journey into the stories as I can. However, whereas the early stories incorporated a lot of my experiences up to that point in an almost autobiographical way, now I have transitioned to using the feelings and emotions I felt/feel as the essential fuel of the story I am writing, which itself has become more of a matrix and less of a linear-style narrative.

It never feels like a sacrifice despite having sacrificed almost everything to get to this point. I have no permanent home, no car, and no reliable income. I have one suitcase, a laptop and a Kindle. If you can’t carry it, you don’t need it! If needs be, I could write on the Kindle, so I could afford to kiss the laptop and the suitcase goodbye.

Happy to the point of delirium—how?

I think about this a lot. Many of my stories deal with "issues" and the process of "resolving" them. I resolve nearly all of my issues through writing them out of my head. However, we all have issues and they don’t all resolve neatly, so staying happy is about being honest about how I feel, confronting my fears, exchanging my energy, and helping as many people as possible in as many ways as possible.

I used to write one story at a time. There may have been times when I had a story waiting to be reviewed and a new one on the desktop being worked on actively. That changed. Now I have at least twelve manuscripts open on the desktop at any one time, and I spend my time flitting between them all, sometimes adding a single word, a sentence, a chapter, or ten thousand words, but it would be rare to spend the writing day focused on just one project.

Input hungry? Yes, I am. Typically, I will be writing to music (the story will dictate the type of music I want to listen to); often opera/classical, rarely vocals because they distract me. I’ll have a stack of short films and any number of Youtube vloggers latest posts to watch throughout the day. I’ll be flitting between at least six books on the Kindle.

How do stories arrive? Often, a line of dialogue will pop into my head. For example, "four shot tall latte, please," is the opening line of The Great Dane Saga, which is 150,000 words and waiting to be re-edited and republished. One line of fairly innocuous dialogue gives rise to a tome of 500 pages? Yes. And that is just one of many examples. That said, the latest story that I’m working on (The (mis-)Adventures of Captain Du Bon Le Phare) arose as a consequence of reaching for a tube of my favorite harissa paste—the name of the brand sparked a thought that has turned into a steampunk-ish style chronicle of an anti-hero. Will it become a series? I would not be surprised.

Literally everything comes into the realm of inspiration. The death of a coral reef, reported on the Internet, spawns a safe sex fable (Juxtaposition). One of my favorite films, Dead Ringers, gives rise to a dark story of sibling rivalry (The Two Piece Jigsaw). Emma Kirkby’s rendition of Dido’s Lament births an epic love story (Grand Affair). Finding a Stone Age arrowhead in my garden produces a fantasy series (The Map Stick). Every story has a trigger, and it seems to me that of late, almost everything is giving rise to a new story.

Writing is my entire Universe (which also involves posting 100 tweets a day); and when I am not writing my own stories, I’m collaborating with my best buddy, Chamber Mars, to produce the Inspector Fenchurch Mysteries (as Carter Seagrove), or I’m translating Chambers’ two series Zac Tremble Investigates and The Life & Times of Johnny Santé into English; or I’m co-editing the work of Morgan Starr and Shannon M. Kirkland; or quite possibly, designing/co-designing a new book cover or book trailer, processing the edits on the latest audio-book recordings sent in by the voice talent, working with other artists to produce original abstract art narratives for some of the stories, which will be used for book trailers/short films.

And there are the films! Principally, Tonight It’s You, a short film being made between The Carter Seagrove Project LLC and ASPD films. We expect to release in early March 2016. Writing has led to the formation of so many partnerships and friendships—probably my least expected outcome of self-publishing...but the most cherished of them all.


The journey of the last three years of self-publishing has been the most satisfying that I can ever remember.