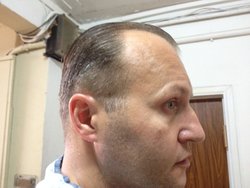 Imagine you live in a society where private property is a curse, business or entrepreneurship is a criminal offense and likewise—non-working parasitism. You can't leave the place nor change its principles. Surrealistic? Science fiction? That's where I lived—in the USSR, the biggest and most "glorious" empire. And then it all started to crumble. I was off to Israel for a few years and when I came back it was a different world. Also surrealistic, improbable, but different.

For many years I was virtually living on the plane traveling back and forth between Israel and Ukraine (plus some other countries), thus sharing my time between family and business. Not for a second the feeling of a unique phenomena unfolding in front of my eyes left me. The transition from pre-communist Soviet republic to an independent, Wild West capitalistic, corrupted pseudo-democracy was fast, furious and ruthless to those who didn't know how to adapt. On the other hand, these turbulent times benefited modest Soviet citizens, who were apt to grasp what was going on and use the new rules, or more precisely, total collapse thereof, to their personal favor. It's no wonder that every ten years of her short, twenty-five-year-long history Ukraine undergoes a revolution.

Within a remarkably short period huge factories, built during decades by the Soviets and employing tens of thousands of employees, ended up in private hands for a much lower than market price. Being a commercial lawyer, you are very aware and exposed to the dark side of things, which usually represents a good material for a high-voltage thriller, noir or action book.

Having all of the above as a background, at some stage I started to think that a story of a fictional billionaire who uses real schemes or scams for enrichment could be of interest to those who wonder what happens in places once sealed almost hermetically by an iron curtain. I thought revealing the unbelievable magnitude of corruption could also be thrilling. These ideas evolved into a plot-line for a book that I conceived. Five or six years ago, there was a series on Israeli TV about Russian or Ukrainian oligarch (extremely rich individual having considerable behind the scenes political influence) coming to Israel, buying a football club, marrying Israeli woman and so on. It was pretty naive and clichéd in my opinion, but still—so popular. I thought the oligarch theme was intriguing and that I could come up with a much more realistic story. My general assumption was that people were always curious how someone made countless fortunes. Many watched with interest movies about Mark Zuckerberg or Steve Jobs. Their stories may just look trivial in comparison with those of their Eastern peers....
So from time to time I was writing down scenes and outlining the plot. One day when I was having a beer with a friend (a published non-fiction author) and I shared the idea with him. He was pretty enthusiastic about it. We decided to go for it. About a year later we had the first book: Rise of an Oligarch. Were it not for him, I doubt I would've found time or confidence to finish it on my own. I knew I had a story, but I wasn't sure I wanted to be a writer or whether I was capable to become one. Hmm, I doubt it even now, as despite many positive reviews, my books are not yet New York Times bestsellers.

And then I've discovered that writing is addictive. Since I was so eager to find out what happens next with the protagonist and having garnered enough confidence, I just sat down and wrote the sequel myself (Mortal Showdown, released in June, 2015). I'm currently working on a third installment that might conclude the trilogy and which shall contain a certain surprise, call it a gimmick. I hope to air it rather soon, so don't bite your nails.