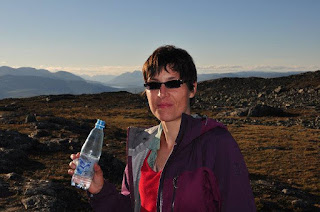 When I was about six, my parents read me a story called “Whisper the Winged Unicorn.”  In retrospect, it may not have been that great, but for me it was a life-changing experience, because the six-year-old me wanted to be Whisper, wanted to live in Whisper’s world.  Soon I was spending as much time as I could walking around and around, preferably on top of something high and difficult to balance on (first the edges of truck beds, then fence tops, then barn walls) and telling myself stories: first about Whisper, and then about all the other horses, unicorns, and other creatures that were filling my imagination to overflowing.  By the time I was seven I’d even learned to read (I’d been very skeptical about reading as an activity prior to this) in order to be able to feed my craving.

So it was pretty much set, in my mind at least, that I was going to be a writer.  The problem, as I’m sure my comrades of the keyboard will understand, was that my technique was in no way adequate for my ideas.  By the time I was in my mid-teens I already had the seeds of the world that I’ve ended up using in The Midnight Land, my first novel, germinating in my head, and when I was 18 I started writing my first novel based on that world.  Fortunately, that draft has been consigned to dead-laptop oblivion, as has its sequel and the sequel after that (I might suffer from a touch of graphomania), but I spent the next 10+ years working on and off on various novels, novellas, and short stories, a few of which were published (most of which have, quite rightly, been allowed to return to the soil from which they came), where they are nurturing the new seedlings that are springing up from that loam.

As all this was going on I’d also decided to buckle down and get a degree and a job.  I radically over-fulfilled the plan, getting not one but three degrees: a BA in International Studies, an MA in Russian Translation, and a Ph.D. in Slavic Languages and Literatures.  It was while I was working on the last that I got my idea for The Midnight Land.  I was reading medieval Russian literature and came across that phrase, which was frequently used to refer to Russia and the north, and I knew that I’d just found the title for my next short story.  I immediately sat down and started writing it, thinking I’d finish it that fall and submit it somewhere over winter break.

Two years and a considerable amount of pain later, I had a thousand-page first draft, along with a pressing need to finish my dissertation and get a proper job.  So I put away the novel and concentrated on graduating and finding academic employment, two experiences that, to borrow from Dick Francis, opened up vistas of writing pain that I would have much rather had remained closed.  Writing cover letter after cover letter, research proposal after research proposal, updating and proofreading my CV, writing and submitting articles for publication, and trying to get in what I could of my dissertation whenever I could, while also teaching and grading, and then, when I finally got a job after 10 months of this, realizing that 1) the job didn’t pay enough to live on, and 2) it was time to start all over again, because my contract didn’t even last all the way through the semester (seriously—my first contract ended before the last week of the semester, which meant I wrote, administered, and graded my final exams, and submitted my final grades, while I was not technically under contract with the college) was the kind of thing that either breaks you down, or makes you stronger.  Honestly, I’m not sure which it has done for me, but after several years of the contingent academic labor life, fortunately on the “upward” rather than the “downward” track, my writing discipline is now rock-solid.  Cranking out all those tests, lesson plans, articles, and most especially job materials, often while under a strict deadline and with the possibility for failure—“failure” being one misplaced comma or extra space between words, since that’s the kind of thing they say can doom you—looming large in my mind, made me break through all the barriers between my keyboard and my subconscious, so that when I started working on my fiction again, I was astounded at how quickly and easily the words flowed.

Once I’d decided to return to fiction, I decided to look into self-publishing, since I’d become pretty disillusioned with the editing process as I’d experienced it as an academic, and I was also tired of getting piles of rejection letters every week.  I figured it was one thing to get paid to go through that kind of thing as a job, but I didn’t need to do it in my leisure time as well, and I didn’t want to spoil my relationship to my art with those kinds of pressures.  I spent more than a year polishing up The Midnight Land in between my full-time job of teaching and research and my other full-time job of applying for more teaching and research jobs, and then, just as I thought it was ready to go to press…I had a brilliant idea for the last book in the series.  So I spent the next year and a half working on that instead, and ended up with another 1000-page manuscript, plus lots of key insights about the world I’d created, which I went back and added into The Midnight Land, before finally, finally deciding to go ahead and publish it on Amazon.

I hit a slight snag at that point when I discovered (duh!) that my manuscripts were way too long to be published as is, and needed to be broken up into multiple volumes.  I’d originally planned a trilogy, called The Zemnian Trilogy, and I still am planning three more-or-less stand-alone stories with three different central characters, but each story is being split up into multiple volumes, so it looks like I’ll end up with a trilogy in seven volumes, if not more.  As a huge J.R.R. Tolkien and Douglas Adams fan, I actually quite like the idea of having a book that is composed of multiple books, and a trilogy that is made up of more than three books.  I split The Midnight Land into two volumes, breaking it off (again, partly as an homage to Tolkien) at the most dramatic moment I could find.  I’ve released Part I (The Flight) in both Kindle and print form, and Part II (The Gift) in Kindle form; I’m hoping to release it in print form soon.  Now I’m working on The Breathing Sea, the next installment in the series, which like any good Russian novel will no doubt will be just as loose, baggy, and monstrous as its sisters.